Until 10am traffic is closed on the A1 Zagreb-Split-Ploče motorway between Ogulin and Brinje junctions in both directions due to roadwork, detour: DC23/DC42 state roads through Oštarije and Josipdol. On the A3 Zagreb bypass road between Kosnica and Ivanja Reka junctions towards Lipovac the queue is 1 km long. Due to strong wind on the parts of the DC8 Adriatic road Bakar-Senj, Karlobag-Sveta Marija Magdalena, on the DC99 Križišće junction-A7-Križišće (DC501) state road and on the LC58107 Kraljevica (DC8)-Križišće junction (A7) local road there is a traffic ban on: doubledeckers, trailers and motorcycles. Roads are partly wet and slippery. Rock sliding is possible in mountain areas and on the DC8 Adriatic road. Due to fog visibility is reduced. Traffic is dense in cities and on their bypass roads. During the day difficulties can occur in roadwork areas. Drivers are asked to adjust the way of driving and driving speed to road conditions and to keep the safety distance! Until 31 March the headlights have to be on during the day as well. 15 November-15 April winter equipment is mandatory on Croatian state roads with frequent winter driving conditions. Due to winter driving conditions there is a traffic ban on freight vehicles with a trailer and all other vehicles have to use the winter equipment in Lika mountain area on the DC42 at Poljanak as well as on all regional and local roads in the area of Korenica. On the DC547 Sveti Rok-Mali Alan state road all traffic is suspended due to snow. Traffic restrictions: A1 Zagreb-Split-Ploče motorway: -29 and 30 November, 1 and 2 December 10pm-5am traffic is closed between Ogulin and Brinje junctions in both directions, detour: DC23/DC42 state roads through Oštarije and Josipdol; -29 and 30 November 1pm-3pm between Šibenik and Vrpolje junctions traffic is occasionally suspended two times for about 15 minutes in both directions; A2 Zagreb-Macelj motorway: -29 November 8pm-5am traffic is suspended between Krapina and Trakošćan junctions in both directions, detour: DC1 state road; -until 30 November 15th-18th km one lane is free only in each direction; A3 Bregana-Lipovac motorway: A4 Zagreb-Goričan motorway: -one lane is free only at Vrtlinovec tunnel 33rd-38th km in both directions until 5 December; A6 Rijeka-Zagreb motorway: -until 23 Decmeber 67th-71st km one lane is free only in each direction; A7 Rupa-Rijeka-Žuta Lokva motorway: -until 22 December at Matulji junction traffic is suspended in the exit lane from direction Rupa border crossing towards Opatija/Pula, detour: Jurdani junction (A7)-DC8-Matulji roundabout-Opatija/Pula; -29 November 10pm-5am traffic is occasionally closed for about 15 minutes between Križišće and Šmrika junctions as well as at Krk bridge (DC102); A8/A9 highway in Istria: -between Lupoglav and Veprinac junctions temporary traffic signals are in operation - between Lupoglav and Vranja junctions there is a traffic ban on abnormal load wider than 3 m; - until 16 December at Pazin viaduct between Rogovići and Ivoli junctions temporary traffic signals are in operation and there is a traffic ban on abnormal load wider than 3 m; -tonight (29 November) 10pm-6am at Učka tunnel one lane is alternatly free only; DC1 Karlovac-Slunj-Split state road: -at Turanj on the section Karlovac-Budačka Rijeka traffic is proceeding in one lane only until 16 December; -due to roadwork at Sučević viaduct on the section Gračac-Knin traffic is flowing in one lane only; DC8 Adriatic road: -29 November 8.30am-1pm traffic is suspended at Žabica viaduct at Rijeka towards Opatija; Pelješac bridge: -permitted only for motor vehicles, -forbidden for pedestrians, cyclists and motor vehicles, which cannot reach speed higher than 60 km/h. Roads closed due to roadworks: -DC2 Vukovar-Ilok between Sotin and Opatovac (until 19 April 2023); -DC Osijek bypass road between Elektroslavonija and Nemetin junctions (until 21 December); - DC14 Andraševec-Bračak (until 30 November); -DC417 Osijek-Nemetin (until 15 December).

Ferries operate according to timetable, there are no difficulties. 3 December 9602 ﻿Split-Vis﻿ ferry departs Vis port at 4.30pm (instead at 3.30pm). ﻿ On the line ﻿Split-Vela Luka-Ubli (departure Split at 3pm) Lastovo ferry is operating (garage height 3,80 m). ﻿ The latest timetable is available at the following sites: https://www.jadrolinija.hr/en/ferry-croatia http://agencija-zolpp.hr/linije/

Traffic events on map
Traffic events are geolocated and can be seen on interactive map.
Clicking on image or url will open map with events in external browser: 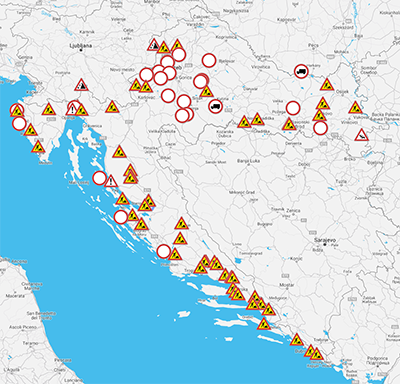 Traffic forecast for 30 November 2022﻿ Due to snow or rain roads of mountain areas will be wet and very slippery, particularly bridges and viaducts due to low temperatures. ﻿Due to fog visibility will be reduced in the interior. ﻿Rock sliding is possible in mountain areas and on the DC8 Adriatic road. ﻿ Due to strong wind on the DC8 Adriatic road, on the ﻿A1 Zagreb-Ploče-Karamatići and A6 Rijeka-Zagreb motorways there will be traffic bans on some vehicles. ﻿ Dense traffic is expected in cities and on their bypass roads. ﻿﻿﻿﻿﻿﻿﻿Difficulties can occur in roadwork areas.﻿ ﻿Due to increased traffic volume there can be delays in passenger traffic at the ﻿﻿border crossings with Slovenia ﻿and ﻿Bosnia and Herzegovina,﻿ ﻿﻿﻿﻿in freight traffic at: Bregana, Macelj, ﻿﻿Tovarnik and Bajakovo. ﻿In ferry ports ﻿﻿delays are expected for wind. ﻿Drivers are asked to adjust the way of driving and driving speed to road conditions and to keep the safety distance!﻿ Until 31 March the headlights have to be on during the day as well.﻿ ﻿The latest traffic information You can get at www.hak.hr, in the HAK Smartphone App (http://www.hak.hr/smartphone/hakmap) or by dialing + 385 1 46 40 800; in case of a breakdown call: + 385 1 987. ﻿ Have a pleasant journey!